Every Sunday morning a group of expats head out of the city to hike or run in the countryside. This is the Maseru chapter of the Hash House Harriers. Hashes, as they are known, exist all over the world. Initially started by a handful of British expats in Malaysia in the 30’s, there are now chapters in most major cities. Many hashes are described as ‘drinking clubs with a running problem’, but hashing in Maseru is much more kid and dog friendly.

The concept of a Hash is pretty simple. Someone called a ‘Hare’ goes out and sets a course for all the ‘Hounds’ to follow. In Maseru this means a couple of people go out and map out a course on Saturday and then Sunday morning everyone assembles and heads out to follow the trail. Some people will run a loop, but for the most part people walk.

We had heard of the Hash before moving here, so when a couple of people invited us along we jumped at the opportunity and found ourselves on a very sunny Sunday morning driving an hour northeast out of Maseru. It was fantastic to see the rugged mountain landscape and even begin to drive into the foothills a bit. The road up to the starting point was paved until the last 6km or so. At this point it was a very good thing that we were in an SUV that could handle all the bumps and craters we drove through.

We arrived at a nice little visitor center consisting of several traditional thatched rondavels, a braii and even loos. It was slightly surprising as there had been one sign at the main road and then none on the twisting roads thereafter. One of the people we were with mentioned that several tourist spots in Lesotho had these newer visitor centers, but most were unfortunately not yet open for lack of funding and general organization. This one was in use however and proved to be an excellent leaping off point as our group of 20 or so headed out into the wilds of Lesotho.

The path was well marked, but generally we just followed along. We met lots of interesting people, many of whom have been in Lesotho for years. We wandered down a steep hillside into a nearly dry riverbed before passing stands of birch trees and eroded overhangs on the sides of the river. The several dogs with us enjoyed jumping into the small pools left behind in deeper recesses of the riverbed.

Our easy, level ground walk was quickly over however and we started to traverse a steep, rocky hillside. After about ten minutes of climbing and gasping for air in altitudes we are not yet used to, we reached the top and were rewarded with a truly majestic view. The grassland stretched out before us and several miles away a wall of mountains thrust up into the blue sky. It was spectacular.

We wandered over the red dusty soil and crossed paths with several Basotho herders in their traditional blankets. There were cows meandering across the grassland and a line of trees marking the a water course on horizon, now largely dry in winter. On the other side of the river gorge there were small clusters of traditional round Basotho huts with thatched roofs. 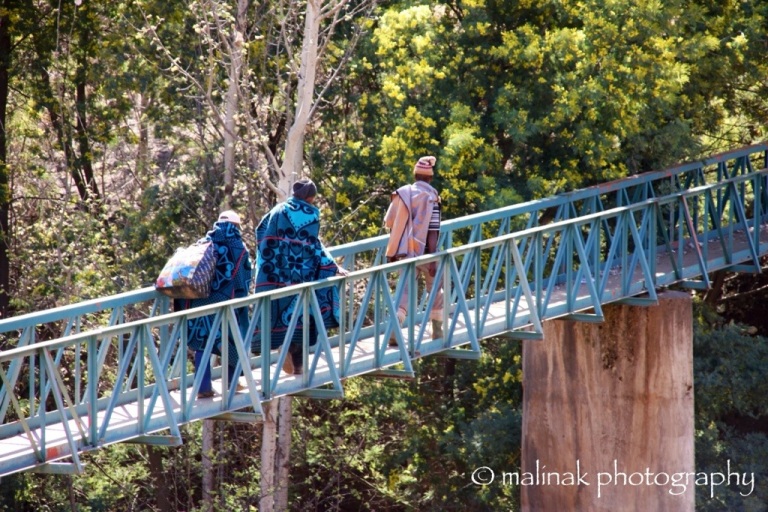 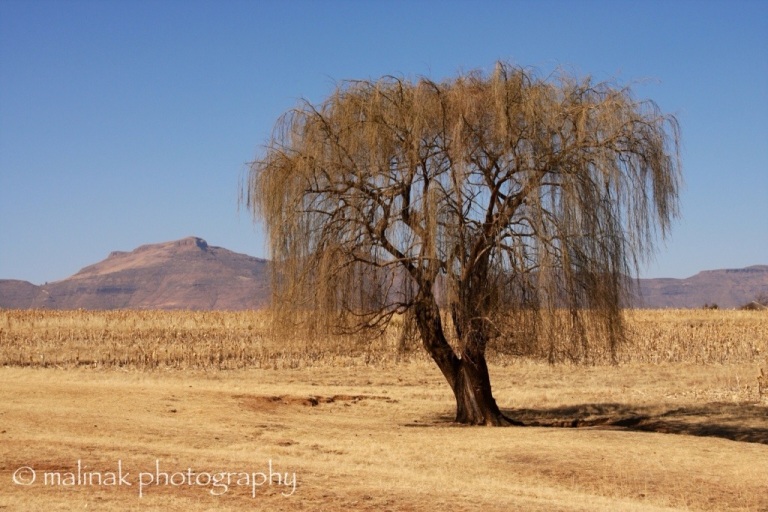 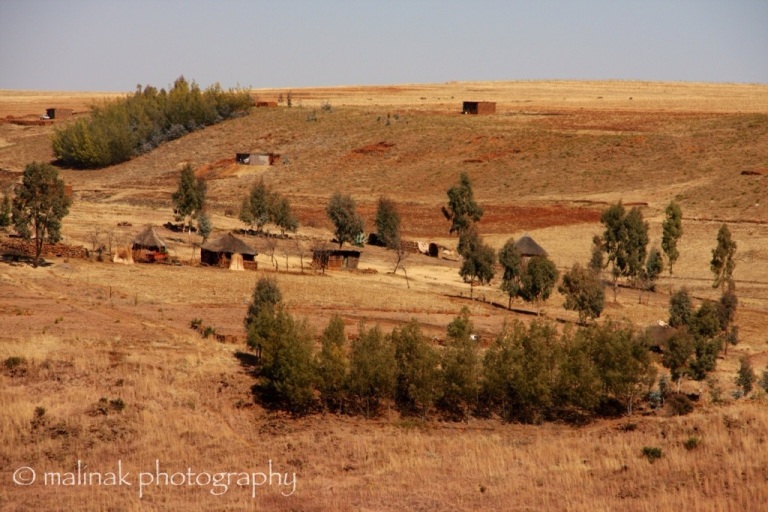 It had already been a wonderful walk, but it wasn’t over yet as we still had to go past some rock paintings created by the San people. Inhabitants of Southern Africa for thousands of years and the most ancient race in the world, the San people lived in Lesotho before the Bantu speaking tribes moved south out of central Africa and started displacing them. Protected by the harsh terrain, the San lived in Lesotho longer than most surrounding locales, but they were eventually displaced in the late 1800s.

The San left behind quite a legacy – rock paintings in several locations in Lesotho. This one was not extensive, but there were still a hundred or so individual figures and animals painted red onto the rock. Many of the images were difficult to see due to erosion and poor maintenance. Some had sadly been desecrated by visitors scratching their names into the rock over the years. Still, it was fantastic to be mere feet away from something painted hundreds of years prior. 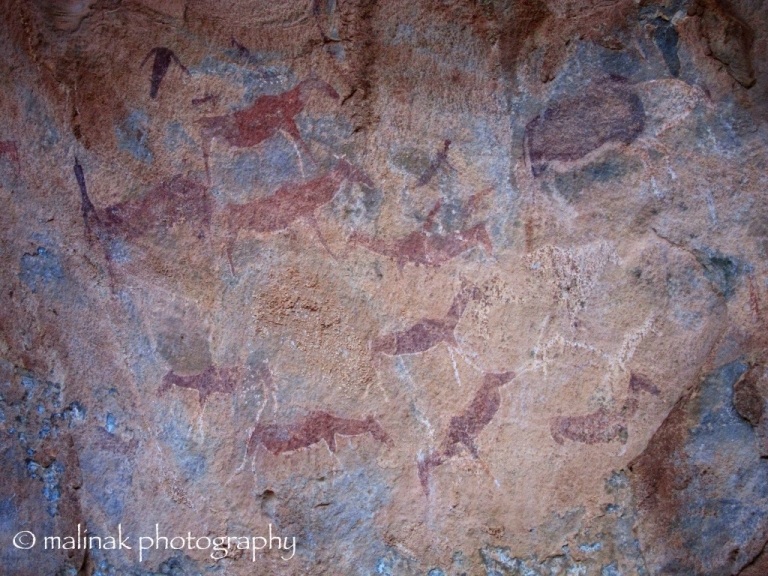 The hike ended back where we began and then a couple of Hash traditions were carried out. The people who set the course had to be judged for their efforts and newcomers had to introduce themselves. All of these things involve small amounts of beer in plastic cups which you drink and then throw the remnants over your head. Word to the wise, if you are ever involved in a hash, don’t stand directly behind the drinkers!

All in all it was a fantastic experience – a wonderful few hours spent exploring the magnificent countryside and meeting new people. There was even a lovely black lab to keep us company so we were in heaven.