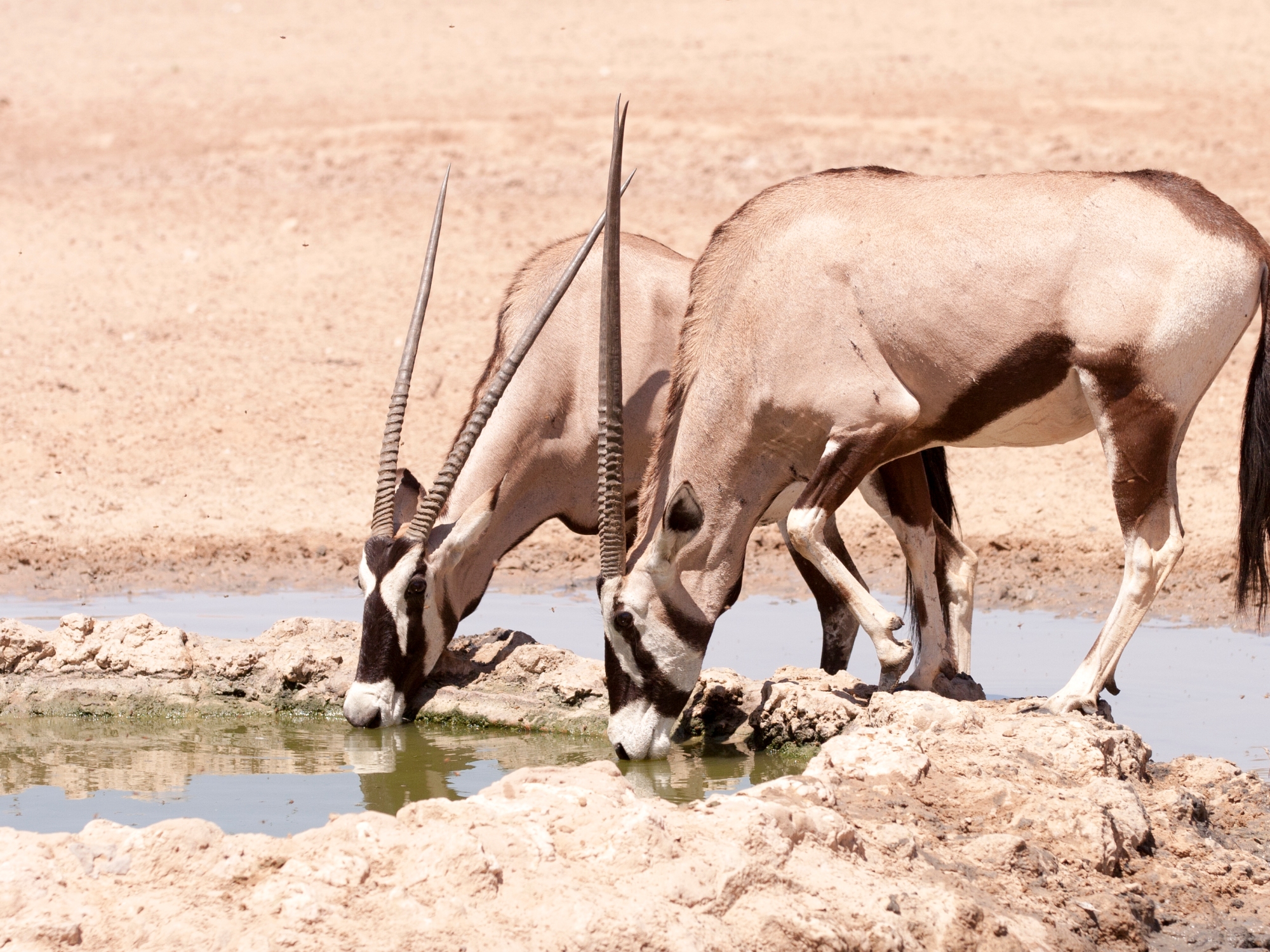 For three days we didn’t exist within any country. We physically inhabited a place and continuously wandered back and forth across the old border between South Africa and Botswana, but technically we were outside the bounds of any nation.

Kgalagadi Transfrontier Park was created in 2000 as Southern Africa’s first Peace Park.  The Kalahari Gemsbok National Park in South Africa and the Gemsbok National Park in Botswana were merged together and the international boundary torn down. Since then, nine other parks have been established in Southern Africa, including the Maloti-Drakensberg Park on the eastern side of Lesotho.

Kgalagadi means place of thirst in the local San language and a more apt name could not have been thought up! There are few words to explain how hot it was there, and our visit wasn’t even in the height of the summer months. Day time temperatures were in the low 40s, Celsius, and that was in the shade. All animals, and intelligent humans, would stay in the shade for most of the long sunshine hours. The shade available would sometimes only be big enough for one animal, so you would see a lone wildebeest or kudu standing on its own under a small tree.

As usual for safaris or game parks, animals were most active early mornings and evenings. We were rewarded our very first evening with a lovely encounter with a pride of 10 or so lions, including some little cubs. They were still largely being lazy under the trees, but the young ones were up and play fighting and jumping on their moms and aunts! The male lion meanwhile was twenty meters away, under his own tree, peacefully asleep. 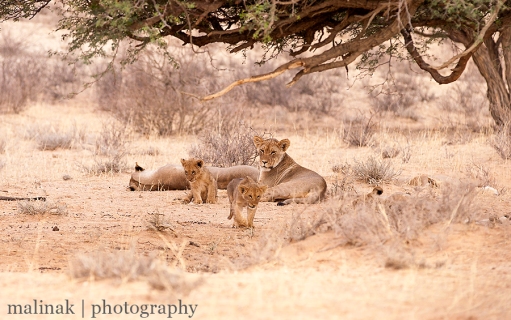 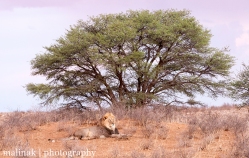 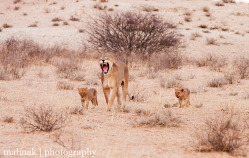 One of the great things about Kgalagadi is that some of the campsites are unfenced. This is only on the Botswana side of the park, but it was too great of an opportunity to pass up for us. We stayed in the Rooiputs Camp, about 30km from the southern park border, and felt very removed from civilisation. There were six sites here, each with a concrete pad and a wood shelter for setting up your tent.

The purpose of the constructed shelter was to protect the site from the harsh sun and provide a place to be off the sand and away from scorpions and snakes. The first element worked pretty well, but the second didn’t work as well as we discovered a squashed scorpion under our tent when we packed up the last morning. It had obviously made its way under the tent during the day while we were gone and then got flattened by us that night when we went in.  Needless to say the ants were happy so there were some winners.

The pride of lions we had seen the first night are apparently well known to hang out at Rooiputs, but we didn’t see them. We did see several live scorpions and the tracks of some seriously large millipedes, as well as hyena tracks the second morning. Unfortunately we didn’t have any other nocturnal visitors, at least none that woke us up!

Our days at Kgalagadi were spent slowly picking our way across the parched sand and dirt tracks of the park. There are two main routes up the two dry river beds of either the Nossob or Auob Rivers. Neither river has permanently flowed in more than 40 years and only fill up after unusually heavy periods of rain. Time in the park is mostly spent driving up parched rivers scanning the variety of red dunes, tan dirt and scrub bushes for animals.

As befitting a park that was initially set up to protect them, there were lots of gemsbok, or oryx depending on your naming proclivities. There were also large herds of springbok, lots of wildebeest, kudu and black-backed jackals and a rather skittish spotted hyena. 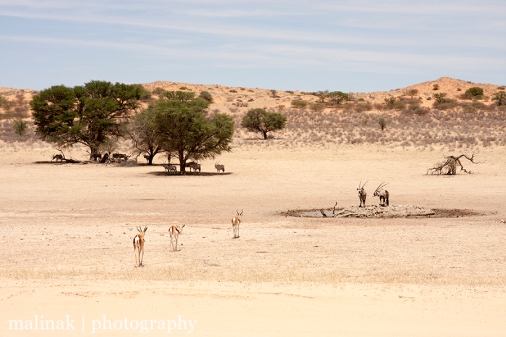 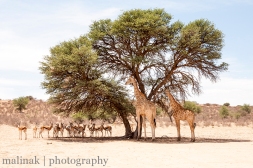 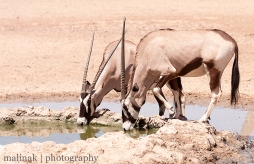 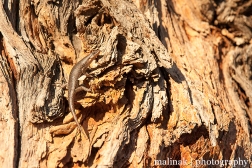 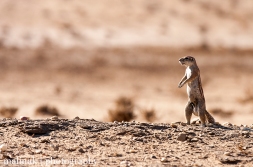 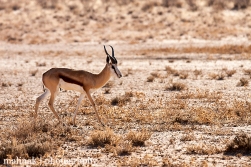 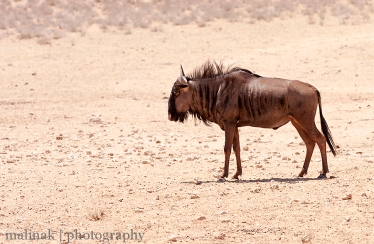 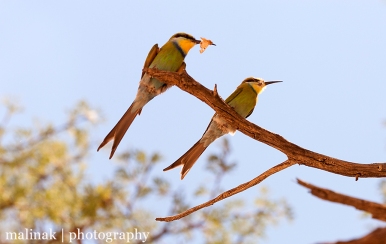 On our last day we saw lots of giraffes near a popular waterhole which was magical. 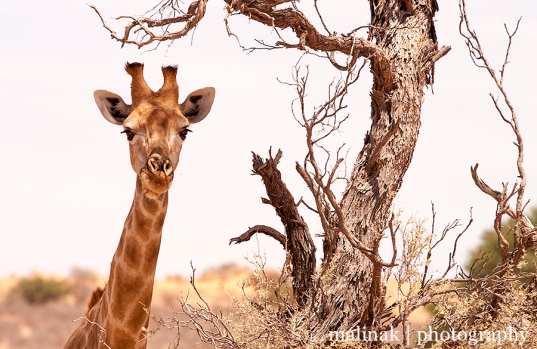 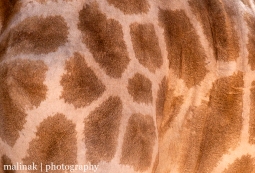 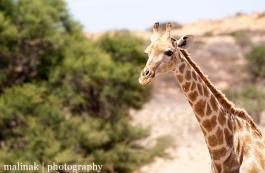 Our first early morning out we were treated to a brief but lovely backlit sighting of a Cape Fox mom and a couple of pups. 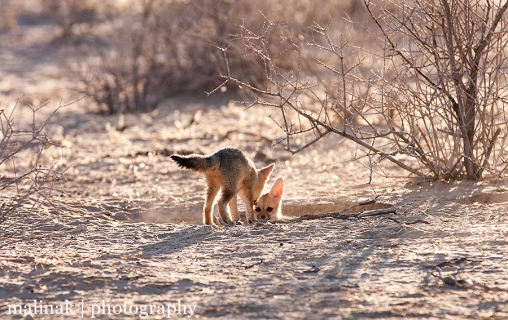 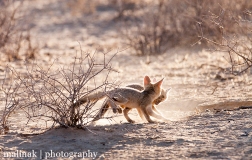 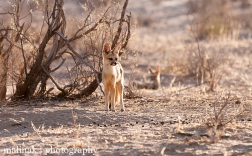 What we really wanted to see however were cheetahs. Kgalagadi is well known cheetah territory, but sadly the best we could do was a rather long distance view through binoculars of two cheetahs laying on top of a dune, doing nothing. This is a normal occurrence for cheetahs, as they are largely regarded as the laziest of the big cats, which is saying something considering how much lions sleep!

Though we left without the cheetah experience we craved, the park was magical in its remoteness, dryness and some special experiences. We even got to feel rain on our faces and watch huge lightning storms far in the distance from our campfire – two things not at all common in this remarkably dry corner of southern Africa for most of the year.