If clothes make the man, then blankets make the Basotho. Men and women, rural and urban, summer and winter, blankets are a constant sight in Lesotho. Vividly colourful with intricate meanings and hierarchies, these blankets are a common cultural thread in Lesotho and beyond. Yet, their beginnings come from the cultural collisions of European missionaries and traders with Basotho, the people of Lesotho.

In the 1830’s French missionaries coming north from the Cape Colony came across King Moshoeshoe I and his newly formed Basotho people; an amalgamation of many different tribes and clans uprooted by conflict with the Zulus and brought together under the benign rule of Moshoeshoe. The King welcomed the missionaries and became an early Christian convert, thus providing access for missionaries and traders to move freely around what was then known as independent Basutoland.

In 1860 a British trader presented King Moshoeshoe I with a blanket, or kobo, and he immediately took to wearing it around his shoulders. Within a short period of time, Basotho started wearing animal skins, colourful cloths and blankets over their shoulders. Noting this new trend, an English trader called Donald Fraser introduced a specially made blanket for the Basotho which became an instant status symbol. The wool and mohair blankets were perfect for regulating body temperatures and staying dry and warm in the variable climate of the Mountain Kingdom.

It was the launch of the Victoria line from the trading store Frasers in the late 1890s that really kicked off the insatiable demand from the Basotho. This first specially made blanket resembled leopard skin and was made for royalty, but its popularity quickly led to an expanded line of designs and common Basotho bought the blankets in droves. Each year for the next century they produced 100,000 blankets and demand always exceeded supply. The Victoria label had become a symbol and everyone wanted one.

Today the blankets are no longer made by Frasers, but by blanket manufacturers Aranda in Johannesburg. Several traditional styles are still available while they work to introduce new designs each year to accommodate the changing tastes of Basotho.  Vivid colours, iconic symbols of Lesotho and two or three pin stripes running through the design are the key identifiers of the traditional Basotho blanket.

These beautiful Basotho blankets often have special meanings, and many designs are designated for specific occasions like funerals, weddings and initiation ceremonies.  There are also special blankets for royalty and the different traditional clans.  Most recently, Aranda has honoured Semonkong, where they shoot their blanket advertising campaigns, with a new design made to celebrate Maletsunyane Falls.

It isn’t just the iconic blankets that are ubiquitous here in Lesotho. Drive out into the countryside and you will see blankets hanging out to dry in every village. Simple ones, tatty ones, new ones and yes, traditional Basotho blankets made by Aranda. Fastened with a special blanket pin, there are many different ways to wear the blanket, but you’ll always see them worn prominently.

Women wear blankets as an extra ‘skirt’ layer in winter, around their middle to keep babies close on their backs as they work the fields or town, or draped over their shoulders for warmth and protection. 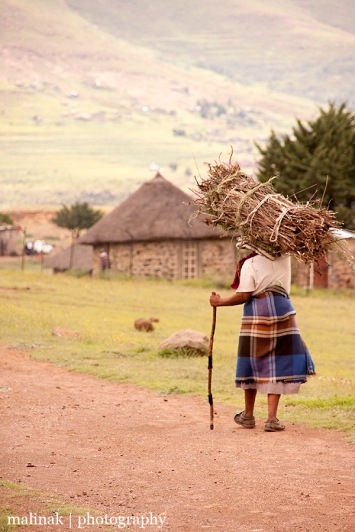 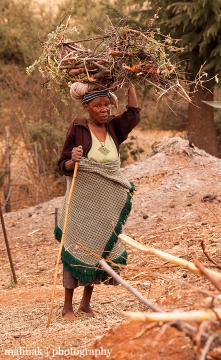 Herd boys make, and fix, their own blankets out in the mountainside pastures, or use those given to them by their family or initiation ceremony. 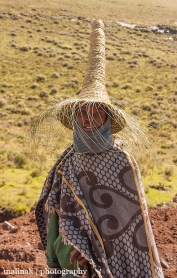 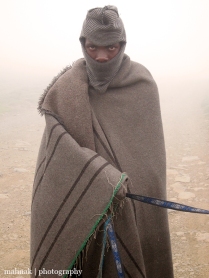 Older boys can be seen cloaked in traditional blankets as part of their initiation ceremony in which they become men.  Throughout the country, men and women of all ages wrap themselves in a warm blanket to fight against the frigid winter morning cold, strong wind, harsh sun or driving rain. 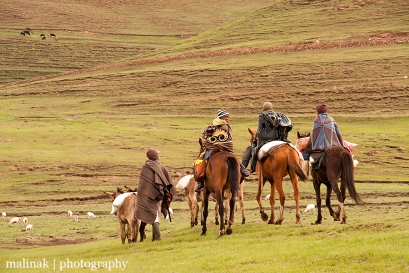 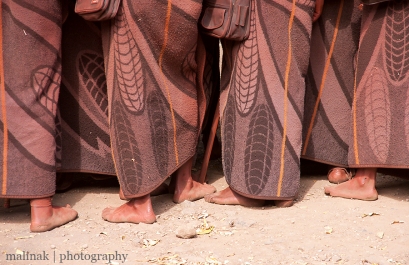 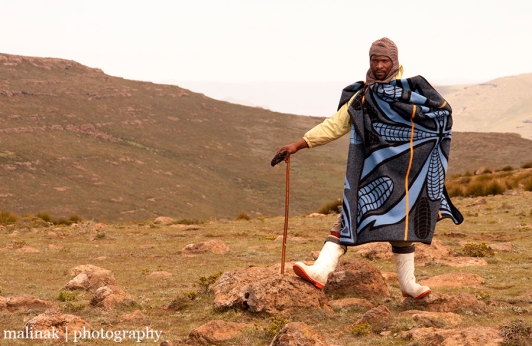 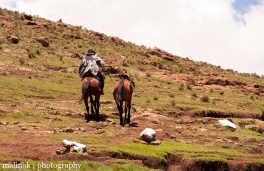 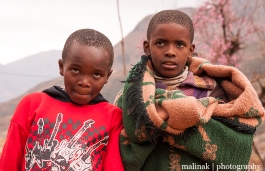 In recent years, Basotho blankets are even becoming high fashion couture. The Wall Street Journal recently published an article about Thabo Makhetha, a Basotho designer in South Africa, who is turning these quintessential cultural icons into jackets, dresses and shawls. Other designers are creating men’s jackets, while other sources in Europe and America are adapting or stocking these blankets, including Anthropologie.  Some claim that even Burberry took their inspiration from the Basotho blankets when they sent some of their models down the catwalk cloaked in wool blankets earlier in the year.

Perhaps imitation is the ultimate form of flattery but it is unlikely that these new converts to modern forms of the Basotho blanket will truly understand the influence they wear on their shoulders. After all, how can a trendy New Yorker or Parisian fully comprehend “bochaba ba mosotho ke kobo” – “the nationality of the Mosotho is the blanket”? Maybe they don’t have to, but we hope they at least become aware of this fantastic little mountain kingdom and the beautiful local cultural importance of the designs they choose to wear.