One of the great things about being in the foreign service is being surrounded by people who share an interest in experiencing cultures. Well two of my classmates put together a Holi party yesterday in Meriden Hill Park in the District. Basically Holi is a Hindu spring festival celebrating the blossoming of new growth after the winter – though there are also religious connotations as well.

The tradition is to throw coloured powder and water at one another! Everyone is meant to wear white and run around throwing the bags of powder and water balloons at everyone else. A group of thirty or so of us gathered in a public place and then proceeded to go crazy! There were a lot of bemused bystanders, but we all had a blast! In the end it looked like a paint factory exploded!

We then partook in some traditional Indian line dancing, which involved short wooden sticks that we had personally decorated earlier. It was two parallel lines with the people standing opposite hitting the sticks together and then moving down to do it again with the next person. Of course the more flamboyantly you could move – think turns, jigs, twists, etc – the better! Afterwards we had some Indian sweets and general picnic offerings. 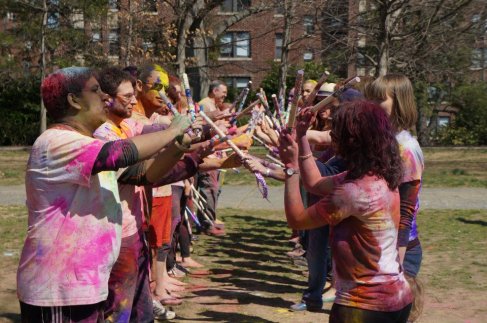 Perhaps the most interesting part of the day was walking from the park to the bar. To say we got intriguing looks and comments from passersby would be an understatement! Of course I hadn’t really seen what I looked like until I saw the mirror at the bar – I completely understand why people responded like that!

It was a great day out – especially as it was the first truly warm day of spring. Sun, warmth, good friends and coloured powder – not much more you could ask for! 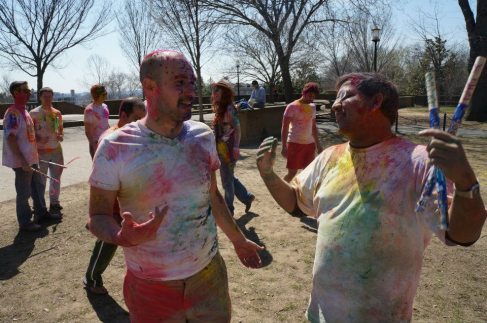